Vacationing in the San Juan Islands, Paradise of the PNW 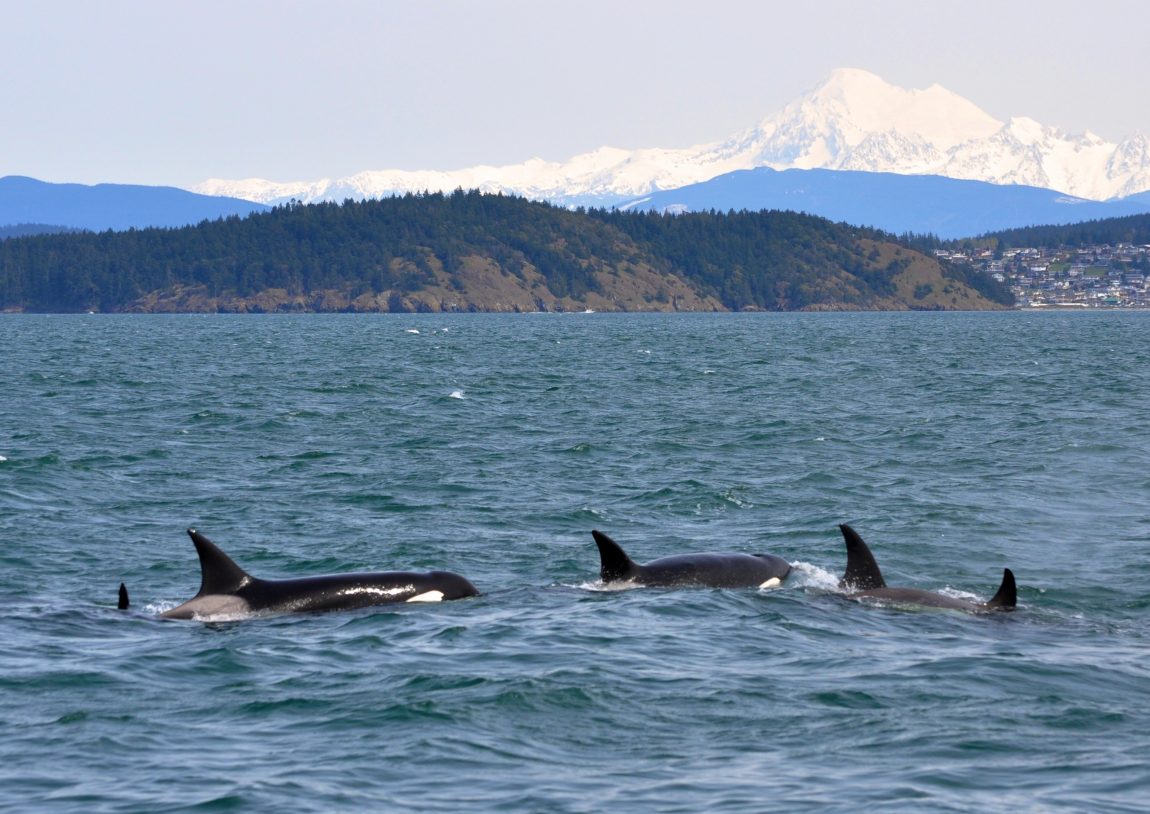 It’s officially summertime — aka, time to hit the beach, am I right? Well, the Pacific Northwest is home to its own little paradise known as the San Juan Islands. It may not be your typical sip-a-mai-tai-in-the-sizzling-hot-sand type of island, but I mean, it beats just about anything else nearby.

Just a couple hours northwest of Seattle, the San Juan Islands sit east of the Canadian border. And it’s just across from the city of Victoria (which I heard is amazing BTW). Although we were just a hop skip away from Canada, I didn’t venture over the border this time. We actually have a Royal Caribbean Alaska/Canadian cruise planned for September! So stay tuned for that on my International Travel Page.

The water around the San Juan Islands is known as the Salish Sea, which contains four surrounding bodies of water. Haro Strait runs along the west and Rosario Strait is to the east. Then the Strait of Juan de Fuca lies south with the Strait of Georgia being north.

A year after my boyfriend ventured up here with friends, we came back with his parents this summer. The main attraction pulling us there was the fact that Aidan had seen Orca whales while on a kayaking tour. But also, after a long cold, rainy start to Washington summer, we were dying for island life.

To be quite frank though, this place has its ups and downs for sure. Because let’s face it, the San Juan Islands are definitely not the Bahamas or Hawaii or some other tropical island. Unfortunately for us, this summer up there was just as dreary as it’s been around the rest of the state. But even still, it’s definitely a cozy little getaway and a must-visit place when exploring the PNW.

To get to the San Juan Islands, you have to first drive up to the quaint town of Anacortes. This town has one of the best Thai food restaurants I’ve been to called Pear Thai Cuisine. From here, you’ll hop on a ferry, which can last a half hour to an hour depending on which island you’re headed to. For us, we were staying on Friday Harbor, which is the furthest ride.

The ferry is fairly easy to figure out. However, pay close attention to the name of the boat you’re getting on. We actually got on the wrong ferry during our trip while trying to get from one island to another. So we ended up riding the ferry for two hours! To be fair, this was the one time the ferry workers didn’t verify what location we were going to. So save yourself the headache and be sure to always confirm where you’re headed.

But definitely don’t take your ferry ride for granted. This is one of the few times you’ll be out in the middle of the vast bodies of water in the San Juan Islands taking in incredible views at a fast pace. Enjoy it while it lasts and bring binoculars — you just might spot some marine life peaking out of the water!

TGIF — Friday Harbor, that is

Friday Harbor sits on the east side of San Juan Island, and that’s where we decided to stay. It’s a pretty adorable town on the water filled with little restaurants, markets, stores, and coffee shops. And it’s quite walkable, although you also have the option of renting a tiny red go-kart to get around. If you’re camping like we were, be sure to stop by King’s Market to pick up all your groceries No need to get them before you head up to the islands.

And if you’re looking for a bite to eat (and a beer to drink), be sure to stop by San Juan Island Brewing Co. It’s right up the road and has delicious pizza.

Glamping is the new camping

Our campsite of choice was Lakedale Resort, which had been the same place Aidan stayed at the year before. You have the option to either go regular camping or “glamping” instead (aka glamorous camping). While my boyfriend and I used our tent, his parents rented one of the glamping spots, which are actually neat.

It’s basically a big furnished tent with a full bed, futon, table, and dresser all on a raised platform. And on the outside, we had a nice covered picnic table next to a fire pit with chairs. It’s considerably more than pitching a tent (like $150 a night compared to $67 a night for choosing to put up your own tent), but so worth it.

And before you complain that $67 a night is a lot for camping, it’s totally justifiable. Lakedale comes with nice restrooms and clean showers, a sink to wash dishes in, complimentary breakfast, a general store with snacks and games, charging stations, and lots of fun activities if you’re traveling with kids. And personally, just having a nice bathroom was a huge plus for me.

Despite the amount of fun I had, I have to say this was probably the most physically active I have ever been on what was supposed to be an exertion-free vacay. The first day, we decided to rent bikes and ride around Lopez Island, which is totally known for its biking and sits in the middle of the San Juan Islands. I’ll be honest — I was already intimidated at first to go biking since I hadn’t been on one since the age of 15. But it’s just like they say, you really do never forget how to ride a bike.

We regrettably chose the option to rent normal bikes instead of e-bikes. And I say regrettably because this was the hilliest damn island ever. And I’m not talking big, short hills, which I would have preferred; I mean, these were long inclines. So sure, going down them were great, but coming back up? Not so much. I ended up walking up most of them and falling pretty behind in our group. It turns out my boyfriend’s parents just nonchalantly go on 60-mile, 6-day bike tours in France. So they were just fine.

Although the biking part wasn’t much fun for me — and left my ass feeling completely broken by the end of the 8 miles of death — Lopez Island is full of gorgeous scenery. I especially liked the flat parts through the open country where you could pass huge fields and see animals like cows and goats along the way. Also, we stopped at Spencer Pit State Park, which I didn’t actually venture down into (because you had to take a long, steep hill to the bottom and I wasn’t about to get back up that thing). But apparently, there’s a really nice beach down there that makes it worth it.

Our next big activity was kayaking. When in the San Juan Islands, you simply must go kayaking. And this time, due to my Orangetheory gym muscles, this one was no problem for me physically and actually was so much fun! We went through San Juan Kayak Expeditions, who have a store located in Friday Harbor. I’m not the best swimmer, but we did have lifejackets, and also I chose to ride the two-person kayak with our awesome guide Caitlyn. She was super knowledgeable about the marine life and the area overall and made a fun companion out there in the water.

There’s not much “learning” involved prior to getting out into the water, but we did go over a few safety measures beforehand. But once you’re out there, it’s so soothing and relaxing. We didn’t see any Orca whales this time, which was a bummer. Especially because once you’re comfortable being out in the sea, you’re like dying for something to come out and say hi. But then again, maybe it was for the best that we hadn’t seen anything.

Last year, when Aidan was on his kayaking tour and saw Orcas, he said he was actually kind of terrified because of how huge their fins are. And I’m telling you guys, Aidan is pretty much never afraid of anything. Which meant that experience has to be fairly humbling for even the bravest souls. But what did make a cool sighting was that you could see Canada just five miles across the water!

Roche Harbor was my absolute favorite and definitely the next place I would stay if I ever venture back here. This place is honestly so gorgeous. Just a few miles away from Lakedale Resort, this harbor sits on the north side of San Juan Island.

At the top of the large hill is the Sculpture Park, which boasts huge sculptures that you can purchase (for roughly $1,000 or more). Across the road are these huge white historic cottages that overlooks a large grassy hill. On the bottom right, there’s a massive pool as well as a playground and tennis courts. And then across the water is the harbor filled with beautiful yachts.

To get to the harbor, you have to go down the grassy hill and walk along the path on the left, which brings you out to where the boats are. Since it was just after Fourth of July when we went, you could still see all the patriotic flags and decorations. On the other side of all the huge yachts — which are cool to walk along and talk to some of the owners — there’s the village with shops and the historic Hotel De Haro.

Oh yeah, and a couple fun facts since the islands seem to be a huge attraction for celebs. Apparently, Chris Pratt owns a farm in the San Juan Islands named Stillwater Ranch. No one exactly knows where it’s located at, but it’s been said that we may have spotted it while kayaking. Also, Oprah was confirmed to have purchased a huge 41-acre compound on Orcas Island known as Madrone agle, which has its own tea house, sauna, and barn. I think it’s safe to say the San Juan Islands are a hidden gem along the West Coast that is definitely worth the visit.

Ready to start exploring the paradise of the PNW? Then head on up north — just be sure to pack a sweater and a rain jacket rather than a bikini LOL. Looking for some hiking to do in Washington State instead? Head over to my blog “The Best Hikes in Washington For Mountain Views, Beaches & Waterfalls.”

The Best Hikes In Washington For Mountain Views, Beaches & Waterfalls

Places to Stay in Las Vegas Without Breaking The Bank

Places to Stay in Las Vegas Without Breaking The Bank