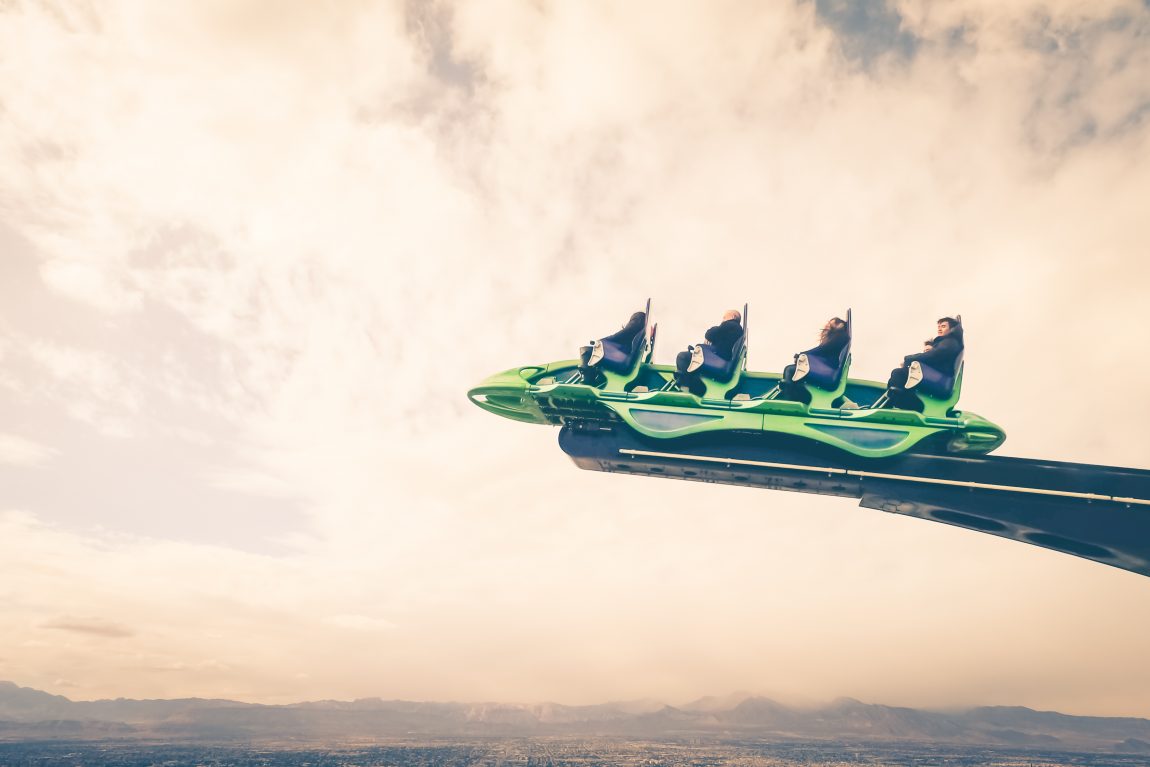 Warning: A non-numeric value encountered in /home/customer/www/sincerelyashlea.com/public_html/wp-includes/media.php on line 467

The joy of hitting up Sin City is that it’s filled with fun activities to let your hair down and go crazy. But sometimes, going to clubs, pool parties, and drinking your butt off aren’t exactly your number one priority. Well grab your fanny pack and your crew (or boo) because we’re talking four things to do in Las Vegas this weekend that have become some of my all-time faves.

Get High at the Stratosphere

No seriously, The Stratosphere Hotel, Casino & Skypod is a 1,149 foot-tall tower, and there’s plenty of thrills to be had at the top. As you can see from the main photo, there are roller coaster rides hanging off the sides. Since most people come to the city for the insane parties Friday through Sunday, this easily makes the Strat one of the most preferable things to do in Las Vegas this weekend. We went on a Friday night and the lines were fairly short actually!

I never had the guts to get on and ride myself, but my boyfriend certainly did. And trust me, it’s almost scarier watching your loved ones willingly fling themselves over the edge while strapped to these terror machines than being on yourself. Regardless, if you’re a thrill junky, there are three rides: Big Shot, Insanity, and X-Scream (the last pictured above).

For even more insane people though, there’s the Skyjump, an open-air leap 829 feet above the Strip. It holds the Guinness World Record for being the highest commercial decelerator descent facility. It’s open all the way through midnight Friday through Sunday so you can dive your heart out. .

A lounge with Killer views

Personally, my favorite part — being the classy, non-extreme, anti-thrill seeker who avoids plummeting to my own death — is the SkyPod and Observation Deck. If you’re looking for a super elegant place to mingle with a martini in-hand, this is the place to be.

It’s also home to the award-winning Top of the World restaurant, although we didn’t get to dine there due to the unexpected dress code. Also, there’s a minimum of spending $55 per guest for an entree, which is nothing compared to what we spent later for our anniversary dinner, but still worth noting if you’re expecting to get by on an appetizer.

For small snacks and a drink with a casual dress code, opt for the 108th floor, which has a full bar, paninis, ice cream, pastries, and other small bites.

For a unique, totally upscale, and royal-like dining experience, a visit to The Capital Grille tops the list as the most expensive things to do in Las Vegas this weekend — and well worth every penny. Originally, my boyfriend and I were in town celebrating our anniversary, and we actually wanted to try Gordon Ramsay’s Hell’s Kitchen for the first time. Lucky for us, it was completely booked up for at least a week. After which, we found out that it’s super overrated, crowded, and has slow service.

A hidden Gem With Views

We last minute did a quick Google search for high-end restaurants on the Strip and that’s when my boyfriend found The Capital Grille. He had previously dined at the restaurant in New York with his dad and a fellow work colleague, noting it was everything his boogie girlfriend (aka, moi) would love. (Probably because his dad had foot the bill and he had no idea how much it actually was LOL). Because the restaurant is less popular and not as exposed to tourists like Hell’s Kitchen, we called and were able to get a reservation for less than half an hour later.

For how expensive this place is — which I’ll reveal at the end — it is an experience like no other. We had a waiter who basically felt like a butler almost, dressed to the dime and catering to our every need. He even sat us at the corner table with the absolute best view of the entire Vegas Strip! It was breathtaking.

Our meal was just extravagant and so mouth-watering. We ordered the lobster bisque, Surf & Turf (lobster tail with medium-rare steak), some kind of white fish, lobster Mac-n-cheese, sautéed Brussel sprouts, and a delicious, dry red wine. It was freaking amazing. But honestly, we were so stuffed from the bisque and wine that we had to take the rest to-go after trying a bit of each.

Oh yeah, and our darling waiter even went ahead and ordered a special anniversary dessert on our behalf, which he surprised us with at the end! Not to mention, he spent about an extra ten minutes getting several angles of photos for my Instagram hahaha.

By the end of this extravaganza, our total came out to be a whopping $344.

IDK about you, but that’s about double the highest price I had ever spent in a restaurant before. But it was all totally worth it. You were paying not only for the incredible food, but the view and the service.

The Cherry on Top

Also, our butler didn’t even add our dessert onto the bill…like WTF. I was almost sure after he brought it out that they would have tagged it on there in the middle somewhere, but they really didn’t! Super quick funny side story though — that night, both Aidan and I felt extremely sick from all the lobster we had ate. We were in bed all night groaning, refusing not to vomit out $344 worth of food. But then the next morning, we were rushing to the airport and FORGOT OUR FREAKING LEFTOVERS. Major fail.

All I have to say is… 1. Don’t go crazy ordering too much lobster. And 2. If you do go crazy and order too much lobster, don’t forget your leftovers. Overall, add a reservation here to your list of things to do in Las Vegas this weekend pronto. I highly recommend and we will definitely be stopping at additional locations for The Capital Grille when it comes to future special occasions.

Tear It Up on Fremont Street

So I already went over some free fun to be had in Downtown on Fremont Street in my blog “Free Things To Do in Las Vegas — Including Partying with VIP Access.” But there’s lots of other unique things to do in Las Vegas on your weekend visit that cost a buck or two. The great thing about this place is that it’s ideal for couples, families, or groups of friends to explore.

Swim With the sharks at the Golden Nugget

If you visit the Golden Nugget, which is one of the most notable hotel and casinos in Fremont, you’ll eventually come across the iconic shark tank pool. That’s right — The Tank and Hideout Pool features a 200,000 gallon aquarium of sharks! You can swim around the centered tank or even take a water slide through to get an up-close peak. When I heard about this award-winning, $30 million pool with my family, we just had to visit. It’s only open for the season through the end of September though and opens back up in April, so plan accordingly.

The price for reserving a spot at the pool varies and can be as low as $35 for a lounge chair up to like $400 for a gazebo or cabana. Sometimes even weekends are low priced depending how booked and far out your reservation is so be sure to check it out prior to visiting.

Get your Crime Fix at the Mob Museum

As the author of a young adult thriller book that focuses around organized crime — with main characters Madisyn & Marcelle Montevega — of course The Mob Museum was a must-visit for me. The best part is that this is no traditional museum and is actually rather exciting for tourists. Notable exhibits are definitely the Crime Lab and the Firearm Training Simulator. And especially for research on my book, the Organized Crime Today exhibit was especially intriguing and informative.

One of the main reasons this place takes the cake at the top of unique things to do in Las Vegas over the weekend is its bar. Once you get your mob boss history fix, adults can head over to The Speakeasy and Distillery, which is open through midnight on weekends. In order to visit any of those highlighted experiences though, you’ll want to purchase the most expensive $50 ticket, otherwise, general admission is $30.

Have a Girls Night Out with Chippendales

In the words of Miley Cyrus…let’s go, G.N.O. You haven’t been to Sin City if you don’t check out one of its shows. And my favorite “interactive” and somewhat naughty show is Chippendales — the hottest male strip show in the U.S.! Now yes, I did enjoy this experience when I was single and haven’t been back since, so I highly encourage my single ladies (or bachelorettes) to hit this up.

The Rules of keeping your Dirty Fun, well, clean

A couple things to note here: you’re not allowed to take pictures inside the club or touch the men (after all, they’re typically someone else’s boo and are for your viewing pleasure only, well somewhat). So when I went with my sister, it was a tad disappointing not to be able to record video, although this was probably for the best.

Scoring a Lap Dance on Stage

I definitely had more fun than any normal visitor because I was one of the few lucky girls to be invited up on stage! Basically, one of the dancers had a crush on me and told the guys below to pull me up there for a lap dance. It was pretty insane and hilarious. But spoiler alert — the guys totally wear socks on their dongs so they’re not “fully” naked LOL.

Afterwards, the dancers allow you to hang out with them in the lounge afterwards. If you’re hoping to actually pick up one of the guys, I would say that’s totally doable. Some of them are single and actively looking to maybe take someone home. But honestly, a lot of the guys were actually in relationships or even married! Overall, they’re super nice and totally not pervy at all (sorry to disappoint those who were looking for that haha).

Pictured below are dancers Kyle Efthemes (left) and Okewa Garrett (right). Meet all the dancers on their website, including three more of my favorites Jon Howes, Ryan Worley, and Tyler Froehlich.

Get Ready to Book Your Trip

I don’t know about you, but even I’m ready to hit the Strip again! There’s really just so much to do in Vegas, no matter how many times you’ve been. Take it from me, who’s been to Sin City more times than I can literally count.

Need hotel recommendations? Head over to my blog “Places to Stay in Las Vegas Without Breaking The Bank” for my favorite hotels to stay in.